In the period from spring this year until last Thursday June 25, I have made four images.

The intuition, the Higher guidance told me this is going to be a series of four images.
And the colors to be used came through.

Pink, with white dots, white, two shades of yellow, one is more lemon, the other like sunflower petals, a darker pink, silver, gray, two earth or brown tones, as well as two from the community of the reds.

Third image: in the first 2 weeks of May, that took longer.

The first image is the most left one.

This belongs together and can be posted on the website.

So, it concerns the first half of 2020 and more precisely from when the spring equinox started until a few days after the Solstice, which heralded the summer.

Other art from the beginning of 2020 is also in the portfolio.

This will be the third in 2020 as art in the portfolio.

What ended up on paper is a fraction of what is more, it always goes beyond paper size and also when parts of rings or movements are drawn that are further and more complete than what you see on the piece of paper in question. I describe it as it comes to my mind today, June 26, it may be that, for example, next week, other addition / explanation from within is added. It is exciting anyway. With all the making there was a very friendly feeling from the inside, the whole mood with the helping contacts was and still is very friendly and very helpful. It comes from the macro cosmos, from dear beloved family.

The first image shows a stretched motion with waves and a light source at the bottom of the image, which appears to be of influence, but you can also feel influences from other sides that there is a lot in play.

The second image there is a form of a yin yang center with a kind of light source in each.
The bottom right corner is still about the same as in the first image. The other movements go around this center, but also move under that lower right corner to what is still happening behind it.

And to other existence that are not on paper.

The third image there is the center rotated and surrounded by yellow and red hugs.
The bottom right corner has been changed or fanned out in other movements that all work intimately and in harmony with each other, that is to the right. On the left it is different, different influences, with the pink and gray and silver tones. And more clearly indicated rings. I remember feeling strong Saturn influences.

The fourth image, the center is rotated there again and has such a circle around it with clear pencil lines. The distribution of the center is different again, also the lines and colors of the center, more refined.

The right side has a somewhat clearer colors and darker.

The circles are arranged differently. And outside of the circles there is a lot in changing movements.
The left side is calmer at the top, down then there is an urge for change. You could interpret it as three movements (in picture), two with red guidance are of a different purpose (to explain) and then that third bottom left, is more related to top left. Saturn influences, yes and still and some is like leaves are formed in nature, you can see it as petals.

I’m going to explain this a little bit more, the first thing that happened is the circle yin yang and then to the right until the second circle, pause.

Then fill in the right side. Pause. Then those two lower movements that seem separate.
And then up left side and then top left corner and then fill in down.

The first two images are placed with a channel message:

Encounters are not by chance

Do you have interest in this kind of art work? 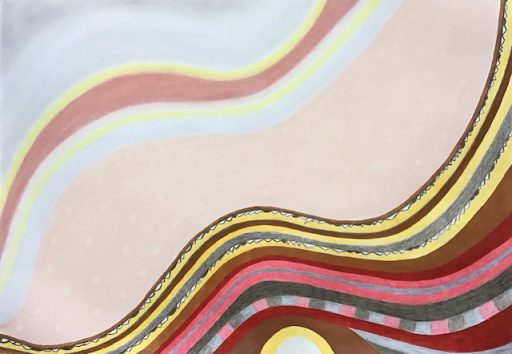 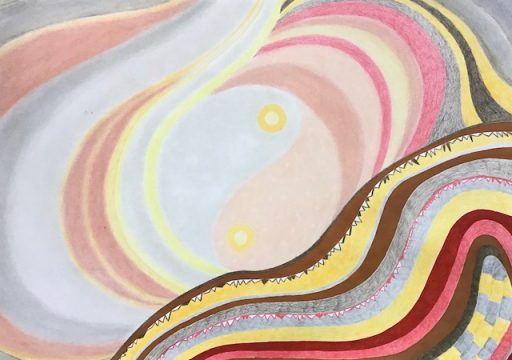 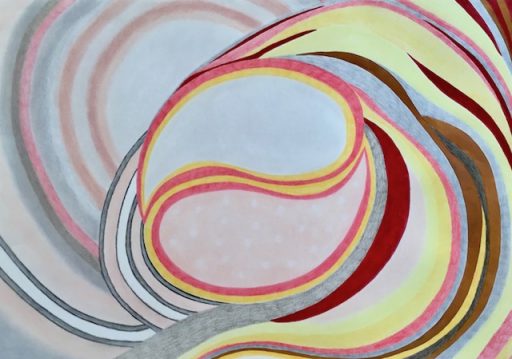 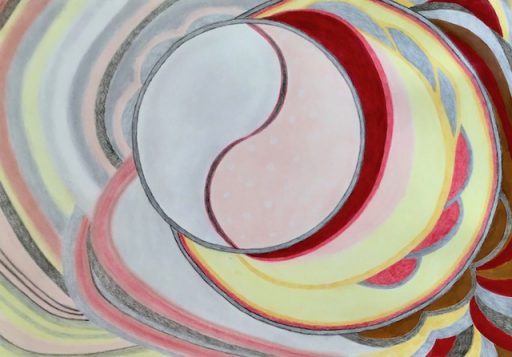