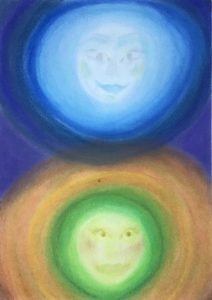 We are settled to communicate with Father Earth, because we’ve asked if he would be so kind to answer the remark.

It was received by e-mail in response to the article ‘Last Quarter of 2020’.

It is about where the Natives speak about concerning Mother Earth’s relation with Father, they speak about Sky Father.

So, we informed Father who is now involved with Earth, about this and herewith his answer.

I expected this and I’ve been waiting for its appearance and I’m pleased it has come into the air.

Dear ones of this communication, please look up the word Sky in the dictionary.

SKY: the apparent vault of heaven, the firmament, the upper region of the atmosphere, the Celestial regions, the Heavens.

The SKY is the limit > the possibilities for achievement are unbounded.

To the SKIES > lavishly, extravagantly.

The adventure of a lifetime, of any lifetime, throughout the Cosmos will always present meetings of a great number of mysteries, it might be experienced as temptations/challenges, a search, a wandering to explore, look and find, or a remain in anticipation, or an immediate explanation by finding or knowing of  the right ‘memory seed’.

As, among others, Anja and Michael gave name to it: -You are meaning this huge mountain of seeds within-.

And indeed, how to know and find the correct belonging ‘memory seed’, they are tiny and innumerable.

Many as natives are so well known and understood with Father Sky and Mother Earth, as ancient tradition.

Many has been taking it in like that, traditions have been passed on, eon after eon, from speaking, telling, to and with drawing and writing (with or without rituals) this has started to circulate in Earth regions, folk sage and honor or more localized, group wise, in the way of a certain population.

It needs air to spread the word, any kind of words, language, anyway in human way. You’re living with breaths in embodiments.

I have not entered in this conversation to tell about right or wrong.

I am present here with this, to indicate that transformation(s) concerning the Cosmos and now in particular, this part of the Cosmos are huge, great and important and having impact on many ancient myths, traditions, metaphors.

This takes always place and did always took place with deity relations in all the concerning worlds and varied realms, up and down.

About me, Father Sky – Earth, as Being, as a Self, Myself, I can be that, it is my lifework, as a great Deity Being involved in the Creation of the Universe.

Telling you that one of the mysteries is, there is something that keeps everything at its place, there fits no definition in human words language to make you understand what this is.

Let’s look at this important, special event concerning this planet Earth, just as an overlook, a bit wider view. The Mother Being Earth in this event situation calling out a need for help, fulfilling this task, with meaning as planet Being.

With necessary potentialities for the future, but with the full Eye here in the now. And I, as the Father Being, as a Lovepair, a cosmic beautiful Lovepair.

I came like the wind from the Sky to join the situation in a more suited shape, related to the event to loving full assist Mother Earth. And beloved ones who will read this as a human, a planet Being also has male/female, and me as this ‘great’ Divine Sky Father has been created to fulfill the male part of Mother Earth. And so, and now it has become ‘high’ time, so to speak, to join beloved Mother Earth like this. ….. alterable.

There is something else involved of super high-level importance and that is what is known as Christ and His resurrection.

Since humanity starts to count from zero again, the so-called years on Earth, this High Divine Influence, even with its preparation, has goal directed and true healing Divine meanings.

The influence(s) because there is variation, are always working like a kind of awakening of what I just have named ‘memory seeds’, the true ones, primal ones, as from real, origin Place – Source.

Everything becomes and did became placed in a different Light and into a certain kind of different tempo [depending on what has been spoken of in the previous message(s)] to higher dimensional Light, the real meaning of living.

So yes, as the SKY is the limit, I did go to Earth and I am performing as Father Earth, as a Green Father Earth, because that has a meaning too.

Representing a pre-Christian symbol for all what has to return.

Related, in Higher Dimensional Relation, with Elementary Beings, Nature Begins and green newcomers, come into existence pure heart centered because of the Impulses of Christ.

It all has to do with the repair the work-experience relations to live with all the creatures of all the realms on Planet Being Earth, Gaia.

It is meant to be like this, based on reasons, the treatments of humanity taken as a whole, the carelessness, overruled by science, technique, the trade and walk of economy and some other looting-like behavior.

Dear beloved one from the remark and the other ones who meet this,

to make love and light stream and flow and make adjustable and to do this Divine Dedication Work it needs a Lovepair: The Female and the Male, the Mother and the Father. The SKY Father had to take or place a number of his facets to descend to Mother Earth.

Or maybe nicer, to overlook it as a view of the lemniscate (like a vertical eight) SKY Father upperpart > Earth <> Mother Earth. Being able to use all the elements involved also some sacred ones, needed to be in that position.

Another option; The View as the Tree of Life.

Thank you very much from the heart of the SKY is the limit and from the Father heart that is in loving full interaction with Earth too.

Put into work and edited by Anja.

Copyright 2017-2020, Anja Tjelpa. All rights reserved. It is allowed to place this article unchanged on a blog, newsletter, but maintain the integrity of the article. And mentioning the author and the website.