Studied and written with help of the Team, August 2020.

There are what people call time but it is changeable and with stretch, foldable and unfoldable.

People know both, but to remember is part of the incarnation process as a human being.

Of course, there is connection, everything is in cohesion.

There are forces, so to speak, perceived on Earth that are called to come from “outside = actually inside”, that is the other world.

This indicates from what is called invisible world, higher grounds, spiritual.

Man has as a creation human being homeostatic systems.

For instance: a cell. To be able to function as a human being.

They are closed systems in themselves and in balance.

Books etcetera are plenty available about this subject.

One can characterize this as a scientific view, limited on Earth.

With respect for other information out there too, but different in general use.

If you would type parameter(s) (Google) or via search engine, then all kinds of things will appear as it has been discovered and has come for a start to use in the material world of Earth.

There are companies that do-good business with it, by collecting via data digital on Earth, I don’t have to explain how that happens and become used (illegally) as parameters for, for example, the idea of constructing a smart city.

Based on data obtained, let’s skip how, because there are also good and useful intentions associated with.

All in pigeonholes and hutches.

The cohesion with changeable and stretch is far away.

But both here on planet Earth.

What is now also called a parameter by scientists, doctors and such, which evokes stimulant responses in the functioning of humans?

It disrupts the system.

(This is then on Earth, but I am convinced that this has already been discovered in earthly scientific way for outside Earth, sub-universal surroundings.

But with computer simulations all kinds of things become tried out…

All or at least a lot of earthly compacted material.)

The example is about motivation, where does that come from? Incentives?

What is thought, this disrupts through nervous system, brain, it disrupts this system. The disturbance by motivation is a parameter for them.

That is this side.

It means this is on the other side too. It comes from somewhere. Macro.

Only in a different non-materialistic way or refined to very refined matter.

Other forms of existence.

My belief is that it is possible to activate spiritual parameters, in other words, to put it more in the light (spiritual design, symbol, color etcetera), to make memories known.

And I think it can be used two-sided:

To make blockades, what works against, recognizable > that ‘possible’ appearance or whatever it produces, which is not attractive.

This comes from all kinds of directions, as the energies can steer their (for many invisible) way from thoughts. Thinking is incredibly complicated.

Because as you and many others know, in meditations there is always the in-between first, the passage. And that is broad, because there is already flexibility there and often with influences and presences of astral nature.

To explain with words like this, if you turn on the right lightning there or for what and where it is needed for, then is becomes clearer.

Because the intention is to do a lot with it and contribute to the good cause.

The option is to make the ‘passage’ narrower; something tells me that there is not just permission for. There is permission for activation of parameters.

Them, ‘from above’ ‘from inside’ they want to stimulate us, we are there precious and beloved ones, to incite imagination and to support to strengthen it, because then enters one a different field or areas and that makes us as human beings stronger for perception with inner senses.

This idea is very good. Even if this is involved.

For when parameters are made clearer in that higher plane in meditation, it takes intuition, the intuitive knowing is reunited in a way.

Where are those parameters?

The first most useful part in the Deck of Light that has been placed over Earth.

Through this meditation passage area, stretch and then comes the Deck of Light, which basically is a protective layer and it has stretch but it is not an enormous thick layer. Actually, HiDi fixtures with light.

At first, I get through, the rainbow and its colours.

Green always in the middle. But it can move, like the energy fields with us as human beings. Color IS movement. Color is a soul expression. When you think of a color from your heart, you are that color and with practicing, colors.

How are the ‘meters’ recognized? So that the diabolo(s) can be placed on it?

And how many are there? Seven.

Each color has a column with a wreath, such as with Greek/Roman type of columns and a diabolo with seven colors on each column.

It is very transparent in design and color, with a flame inside at the top of the column. An example of types of columns has been selected, because it might be different. Everybody has its own history of lifetimes, which influences the execution of the columns, which means it can be seven different ones.

You, that is what we are meant by on Earth, it is intended for you. 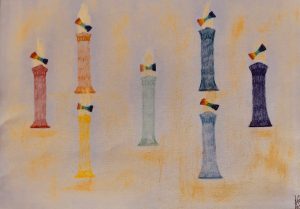 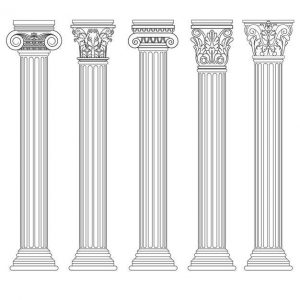 8 Then God said to Noah and to his sons with him:

10 and with every living creature that was with you – the birds, the live-

stock and all the wild animals, all those that came out of the ark with

you – every living creature on earth.

11 Establish My covenant with you: Never again will all life be destroyed

by the waters of a flood; never again will there be a flood to destroy

12 And God said, “This is the sign of the covenant I am making between Me

and you and every living creature with you, a covenant for all

13 I have set my rainbow in the clouds, and it will be the sign of the

covenant between Me and the Earth.

creatures of any kind. Never again will the waters become a flood to

16 Whenever the rainbow appears in the clouds, I will see it and remember

the everlasting covenant between God and all living creatures of every

kind on the earth.”

17 So God said to Noah, “This is the sign of the covenant I have

established between Me and all life on the Earth.”

In relation to the relevant colours and the Holy Spirit.

Red: it is a shimmery colour, think of blushes on cheeks. A soft colour and full of glow, think of red roses. Awakening, especially for the senses. Representative of goodness, strength and warmth, subtle warmth of the soul and has relationship with the will and with Earth, as warmth that one feels at home there. Red has a certain interaction with the Earth, like give and take and for life.

Orange: This colour can evoke a great mood, think of sunset moments, it is of short moments, but orange is a rapidly moving colour, without a centre and surrounding and infinitely qualified with expanding. But it has transparency and clarity, it is playful in its performing and knows, understands how to do this. All this activity gives and has a very specific warmth, perhaps comparable to the human feeling of enthusiasm. A creator of sphere and colour and it continues to fill and to fill this.

Geel: That colour can be seen a lot on Earth, in all the kingdoms of nature. Also, a shimmery colour. Still much belongs to the Light of the Source and still has many traits of it. But descended dimensions to become visible on Earth. It is stronger because it is more concentrated and it has hues that represent the characteristics and purposes of the Light. Warmth, joy, colour of memory, moving forward, will for future. And it is revealing and extremely objective, and has thought activity in relation with other colour(s).

Viridian: The colour Viridian comes straight from Source, the Light itself. It means that the colour is the centre of all colours, the first appearing colour, therefor transparent and silence. A lot of people would say, some kind of shade of green. Colour with a perfect balance and supreme objective, also in motion. The colour reaches Earth via other dimensions, but in principle it is timeless. Dimensions affect the character of the colour because the colour descends into darker. Viridian is the Light of consciousness.

Cobalt blue: What a nice example of the colour is when you look at the bottom part of a candle flame. Blue also has a relationship with warmth, just think of the top colours of a candle flame. Colour for the basis for our consciousness from Middle Ages on, the awareness of three-dimensional space. Blue has given humanity space and everything enveloping (creating boundaries that can be moved), as it were, it makes a hole and inside there is room for Light and for a better connection with Earth. Bearing colour.

Indigo: Think of the passage from daylight “cobalt blue” to nightly indigo, it is meant for realization, a journey is underway. The colour itself is an inner experience. It is a mysterious creative colour, it does contain much more permeable warmth, think of charcoal from barbecue, for example, if you pay close attention you will see movements in the heat, indigo has this too. Very weaving. The warmth of indigo is key for warmth feeling, but with this support.

Violet: Violet brings us back over the threshold, back to the spiritual world, it has a relationship with the sense of responsibility.

It has a relationship with the seeds that are present in the bud in conjunction with inner light. Transition to that which does not yet have a name/insight for people. Essential insight into the sanctity of the Earth and all that has to do with it. Totality. Support for making conscious of the I. The Self in relation with the depth of existence and what it asks of us to participate in, the very deepest courage.

Viridian Green: always in the middle.

The flame of white fire from the column moves the diabolo.

The columns may have the same colour.

There’s always something about a word, the words to explain, isn’t it?

This has to do with innovations on Earth, meaning that words, are not yet on the highest steps, then it is about reading/listening in-between words and lines to comprehend what is meant. One purpose to explain is, it is to stimulate imagery and start to apply the intended.

And there is hope embedded that the human being on Earth can fully act with this, in growing increase.

For me personally is the team, (as example) so very individually, consists of dear friends, close relationships/family, very sincere acquaintances on a spiritual higher dimensional level from all kinds of Galactic natures.

I also started communicating/publishing about the Quinquepartite, which is an enormous overarching and helpful team.

Copyright 2017-2021, Anja Tjelpa. All rights reserved.
It is allowed to place this article unchanged on a blog, newsletter, but maintain the integrity of the article.
And mentioning the author and the website.